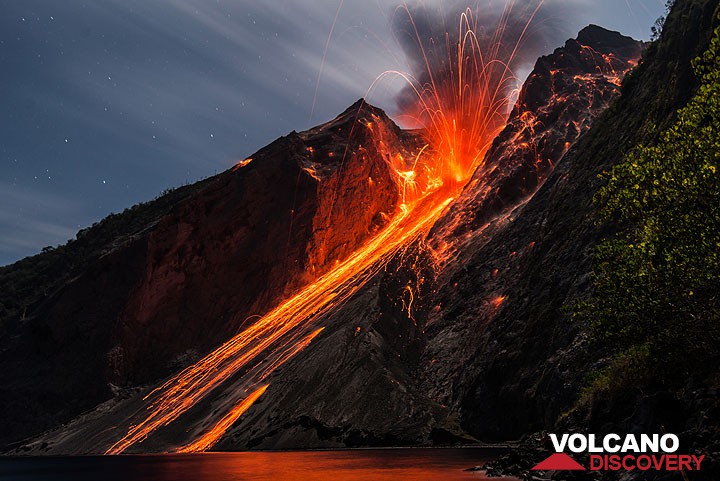 Join us on an exciting adventure to one of the world's most active volcanoes in the remote Sunda Islands!

Volcanoes of Guatemala volcano tour 20 Dec 15 - 2 Jan 2016 (guaranteed date)
Join us on an exciting volcano expedition to Pacaya, Atitlán, Santiaguito and Fuego volcanoes in Guatemala [more]
Few spaces left: volcano tour (19 Oct - 4 Nov) to Ibu, Dukono, Lokon, Soputan, Karangetang!
The legendary Molucca Sea, known for its precious spices that attracted early traders from Europe, is not only one of Indonesia's most interesting and beautiful areas. It also has the largest density of active volcanoes of any region in Indonesia. [more]
New menu for website Volcano-Adventures / VolcanoDiscovery
Recently, our websites www.volcanodiscovery.com (infos, photos about volcanoes & earthquakes) and www.volcano-adventures.com (volcano expeditions and tours) have grown immensely and now contain many thousand individual pages. ... [more]
12-17 Aug 2015: volcano expedition to Raung volcano, East Java
Join us on this special expedition to currently erupting Raung volcano. We offer you the chance to trek to the crater rim and camp there in order to observe this activity from close. [more]
Sinabung Volcano Special expedition 7-11 August (5 days volcano expedition to Sinabung volcano, Sumatra)
Sinabung volcano on Sumatra has been in eruption since late 2013 and been regularly producing spectacular pyroclastic flows, as viscous lava continues to accumulate as a lava dome and regularly collapses. ... [more]
Copyrights: VolcanoDiscovery / VolcanoAdventures or sources as noted.
Use of material: Text and images on this webpage are copyrighted. Further reproduction and use without authorization is not consented. If you need licensing rights for photographs, for example for publications and commercial use, please contact us.