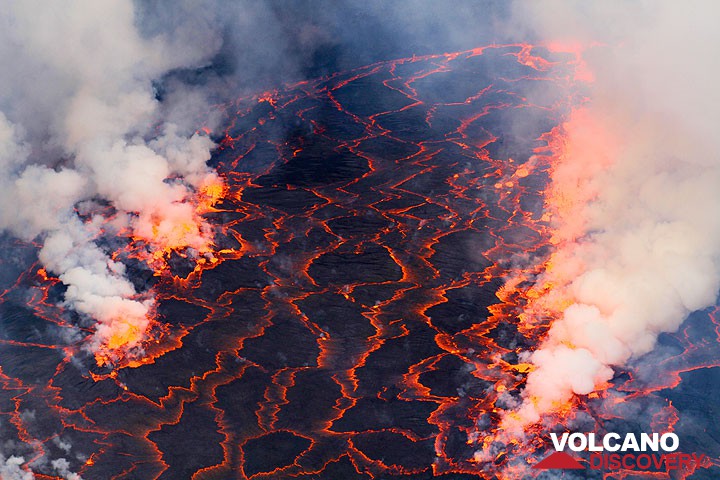 Camp for three nights on the rim of the giant crater of Nyiragongo volcano with its active lava lake and trek through dense forest to observe some of the last mountain gorillas in the Virunga National Park.

Desert, Salt & Volcanoes: impressions from Nov 2015
A day-by-day annotated photo diary of our Danakil expedition in November 2015, by Ingrid / VolcanoDiscovery. [more]
Expedition to Erta Ale & Dallol 7-19 Feb 2016: few spaces left!
We can guarantee the next expedition to the fascinating Danakil with active Erta Ale and Dallol from 7-19 Feb 2016. This is your chance to see one of the planet's most beautiful and interesting areas! [more]
Colima Volcano Special 4-8 January 2016 (5 days expedition to observe and photograph Colima volcano, Mexico)
At the moment (16 Dec 2015), Colima is again in a particularly active state. A new intense phase of explosions, often with spectacular eruption lightning has started and could be a precursor to a new phase of lava dome growth. ... [more]
Nyiragongo volcano lava lake: impressions tour July 2015
[more]
Etna Volcano Special tour 11-15 Dec 2015
[more]
Copyrights: VolcanoDiscovery / VolcanoAdventures or sources as noted.
Use of material: Text and images on this webpage are copyrighted. Further reproduction and use without authorization is not consented. If you need licensing rights for photographs, for example for publications and commercial use, please contact us.