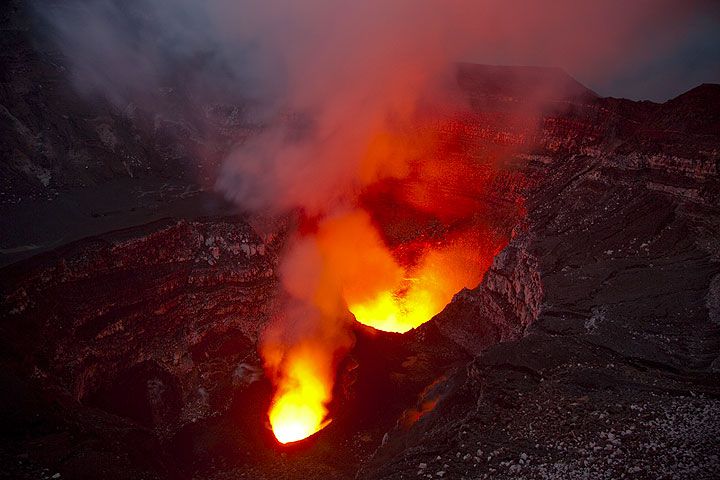 Join a volcanologist and a small group on an exciting tour to some of the world's most active volcanoes!

Volcano-Adventures exhibiting at the Adventure Travel Show!
We had decided in 2016 that for the first time we would present our tours to volcanically active destinations directly to interested globetrotters at the Adventure Travel Show which was held in London over the weekend of 21-22 January 2017. ... [more]
Colima Volcano Special 29 Jan-2 Feb 2017 (5 days expedition to observe and photograph Colima volcano, Mexico)
Colima is again in a particularly active state. A new intense phase of explosions, often with spectacular eruption lightning has started and could be a precursor to a new phase of lava dome growth. ... [more]
Visit us at the Adventure Travel Show!
In less than 2 weeks time we will present our volcano expeditions at the Adventure Travel Show! ... [more]
Guaranteed volcano tour departures with open spaces
Looking for volcano tours with free spaces and guaranteed departures in the next months? ... [more]
Erta Ale Volcano Special 14-21 January 2017
Participants of our just finished Desert, salt and volcanoes tour informed us that although no longer actively overflowing, the level of lava lake inside Erta Ale´s summit caldera is very high, suggesting that more overflows will occur in the near future! ... [more]
Copyrights: VolcanoDiscovery / VolcanoAdventures or sources as noted.
Use of material: Text and images on this webpage are copyrighted. Further reproduction and use without authorization is not consented. If you need licensing rights for photographs, for example for publications and commercial use, please contact us.